Cartoon of the Month
Read more

Tip of the Month 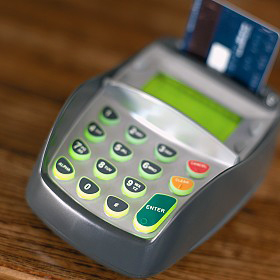 A federal appeals court ruling at the end of March will keep debit card fees charged by banks – which many small businesses consider too high – at its current level of 21 cents per transaction. The latest court room wrangle over so-called “swipe fees” resulted in the overturning of a July district court opinion that would have lowered the fees charged to retailers by banks when consumers use debit cards to pay for goods or services. The fees – sometimes called interchange fees – are set by card providers like Visa, MasterCard and Discover. They are intended to reimburse banks for the cost involved in offering debit cards. The National Retail Federation (NRF) has spearheaded efforts to reduce the fees that date back to the 2011 financial regulatory effort put in place to address the nation’s economic crises. The NRF’s major argument is that the Federal Reserve went beyond the directives set by lawmakers and included costs to monitor for fraud and other expenses that were not specifically outlined in the Dodd-Frank legislation. The retailers argued also that the Fed had failed to promote the competition between credit card companies that the Dodd-Frank legislation required.

The NRF and others (including the National Restaurant Association) believe the current swipe fee is higher than Congress intended back in 2011, and that the recent overturning is a victory for the banks. Opinions vary on how much this setback will affect consumers’ pocketbooks, but many feel the transaction-fee burden is more onerous for small business owners. Regardless of their stance on the issue, many observers agree that the legislation’s language was ambiguous, providing the Fed with leeway back in 2011 to set a higher fee cap. The federal appeals panel said the fee structure rests “on reasonable constructions of the statute.”

The original legislation was designed to limit the amount banks could charge retailers for processing debit card charges. The Federal Reserve Bank was assigned the responsibility for setting the fee structure for banks and has continued to do so since October 2011. The Fed’s initial move back then was to cap “swipe fees” at about 21 cents per transaction – a significant reduction from the 44 cent cost that was the average fee per transaction prior to the Fed’s intervention. It should be noted that the Fed initially proposed a 12 cent per transaction fee and revised the number upward (by including additional expenses) to reach its current total. Usually, the final cost to retailers reaches the 24 cent per transaction mark when all costs relating to the use of debit cards are included.

The recent setback is not expected to deter the NRF and other lobbying groups from continuing their efforts to push for fee reduction. The NRF is not expected to challenge the ruling through the Supreme Court, although that course of action could be pursued. Industry experts note that the Fed is required to reissue its fee rules every two years and suggest that the “swipe fee” battle is far from over.

Cartoon of the Month
Read more